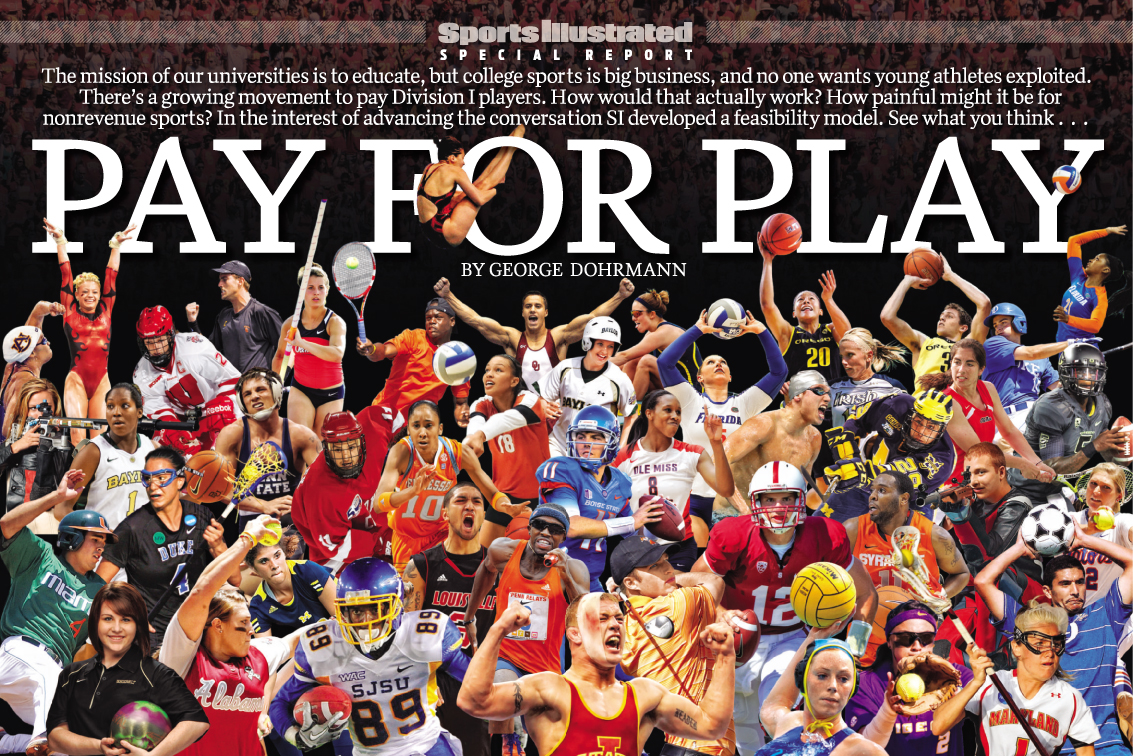 Forward:  I am offering these comments as a prior college, then professional athlete who received a full athletic scholarship prior to signing a professional baseball contract.  Regardless of the NCAA rules regarding “amateur” athletes, there are a lot of ways colleges and universities skirt these rules to make sure they attract the best possible athletes.  There are also issues involving Title IX, men and women equality in college sports, that are at play.

Primary Focus, Football and Basketball:  Let’s be honest, the primary focus of this pay-to-play versus amateur status is for college men’s football, then men’s basketball.  That is where the big TV bucks are and that is where colleges subsidize most of their other athletic and other academic operating costs.  All toll, colleges rake in about $11,000,000,000 (yes, 11 billion) dollars per year from ticket and merchandise sales, and from student “fees” from associated athletic activities.  Out of that, the National Collegiate Athletic Association (NCAA) receives about $1 Billion per year.  96% of that money goes back to its member schools to fund their athletic programs, pay staff, build facilities etc..  The stark difference between Football/Basketball versus all other collegiate sports and revenue brought in by men’s versus women’s sports is visually shown below: 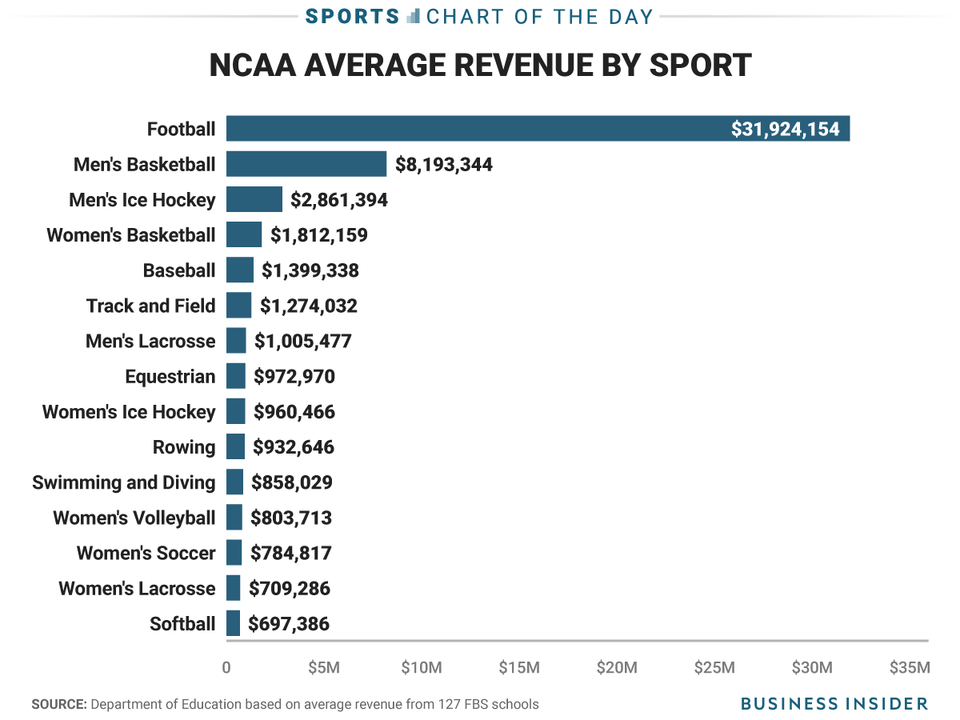 While the NCAA itself makes more off of basketball than it does football, the seeming anomaly is due to the fact that the NCAA receives a large share of the NCAA basketball tournaments while they do not run nor receive much from post-season football bowl games.  The bottom line is that men’s football and men’s basketball, pretty much subsidize the other athletic programs at the collegiate level.

What About Title IX?

Title IX is basically a Federal mandate that reads: “No person in the United States shall, on the basis of sex, be excluded from participation in, be denied the benefits of, or be subjected to discrimination under any education program or activity receiving Federal financial assistance.”  (Note: Not only are institutions that receive grants from the Federal Government included, but if any of their students receive tuition loans they are subject to Title IX.)  The law does not state that men and women, or specific sports programs receive the same amount of money.  It does require that each receive the same scholarship dollars proportional to their participation.  Other than scholarships, the law only requires equitable treatment and benefits for both men and women athletes.

Keep in mind that Title IX did not anticipate athletes receiving any type of salaries or royalties based on their athletic participation. Title IX will be an issue when trying to include salaries and royalties for collegiate athletes.

I can tell you that playing college sports versus professional sports is a totally different “ballgame”,  literally!  College sports has more of a collegial, team spirit.  The game, winning, and doing your best is the focus along with pride for your school.  In pro sports, the focus shifts to you as an individual and what you can do to further your career.  In some instances, the better you do in your position versus others is your success focus.  Sure, winning is important but it is a means to an end and that end is a better bonus or a better contract.

You see pro athletes today sporting flashy cars, clothes, jewelry and living the “good life”.  The other side of that is the temptation towards drugs, alcohol and other vices.  College athletes, even on full ride scholarships and “perks” are no where near on par financially with their pro counterparts.

That said, you should understand that “star” college athletes who are heavily recruited enjoy many benefits that their academic counterparts do not.  Some of the “perks include cars that are furnished by alumni for use by the athletes.  Others have “jobs” that they never have to show up for or actually do.  Others have tutors, housing allowances and much more given to them to play ball!  Even though there are a lot of NCAA rules surrounding perks, they still exist and many of these athletes would not be able to attend these colleges without them.  But, these perks are not the same as a multi-million dollar contract and the life-style it affords.

I personally do not agree that college athletes should receive a salary or commissions or royalties while attending college.  One of the biggest tragedies that I witnessed were athletes suddenly thrust into a multi-million dollar lifestyle without any counseling as to how to manage this new found windfall or how to live a non-destructive wealthy lifestyle.  Their focus was not on their career but on what that career allowed them to do.  The game was secondary as was their team.  The more money, the more they focused on themselves.  Maybe I am a bit Pollyanna but I like the fact that collegiate athletes focus more on the game, their team, and their school.

I have also seen many instances where some college athletes were pushed through their classes and passed on without achieving any real academic benefit.  If there pro career ended or they never received a pro contract, they were dead in the water.  They had no marketable skills!  Paying college athletes would only exacerbate this as the focus would be solely on the game and not on their life.

Finally, just how on earth are you going to devise a scheme where college athletes are paid to participate in their sport, and participate in jersey and other sales royalties?  Will 99.9% of the money go to men who play either football or basketball?  Can’t!  Title IX will certainly raise it head and then you get the politicians involved.  IF anyone can screw this up they would.

Is it fair for male athletes to get the lion’s share of the proceeds?  You witnessed the Women’s USA soccer team complain that they receive less than their male counterparts even though the gate receipts for the men’s sport exceeds that of the women.  Football and Basketball players are on TV and everyone sees their jerseys with their name on the back so they would generate more jersey sales than let’s say, women’s lacrosse!

Joy Read already implored Black athletes to attend Black colleges (HBCUs) to try to get more focus and revenue for those colleges.  Let me see, if I am a Black football player, I can go to Alabama with huge TV coverage or Morehouse College.  Morehouse is rated the #2 HBCU but if an athlete is seeking a pro career, they are seeking TV coverage. Morehouse is a great academic institution and has many great alumni athletes including Edwin Moses, Donn Clendenin,  Roman Harewood and others.  But, if you are a young athlete with stars in your eyes, Morehouse is probably not high on your list. This is not a criticism but a fact.

If the NCAA and others who “police” college sports do go ahead and try to implement some kind of pay-to-play for amateur college athletes, lawyers and sports care dealers will be the biggest beneficiaries of this social experiment.  Civil Rights suits of all kinds will ensue.  Politicians will line up before any camera they can find and pontificate till the cows come home.  And, college sports will disintegrate into the cesspool of big money, corporate avarice, and the athletes will miss out on a right of passage that others have benefitted from.

How Much Money Does the NCAA Make?