This is part two of what is behind the current US-China “trade” stalemate.  The first part was “Trump China Tariff Policy-Win-Win for the US!”, (Short link: https://wp.me/pY51c-1i0).  The first is from Trump’s point-of-view and the second from Xi and the Communist Party.

Chinese Communist Party (CCP) and its current leader, President Xi, not only believe their own rhetoric in promoting  world economic and military domination aspirations but are blinded by it.  Keep in mind, their economic growth is merely the catalyst to achieving world military domination and the spread of the Chinese Communist model around the world.  They believe that it is their destiny to spread communism where others have failed.  This goal seeks to replace the US dominance forever.  When they adopted their “Fifth Plenum”, the fifth of seven major meetings of the CCP to review and set their 5 year plan policies and goals in October of 2015, they  memorialized their domination plan objectives for 2016-2020.  This plan is also critical in that it is the first plan produced under President Xi’s leadership.

The only thing missing from their plans was the election of the US President, Donald J. Trump! 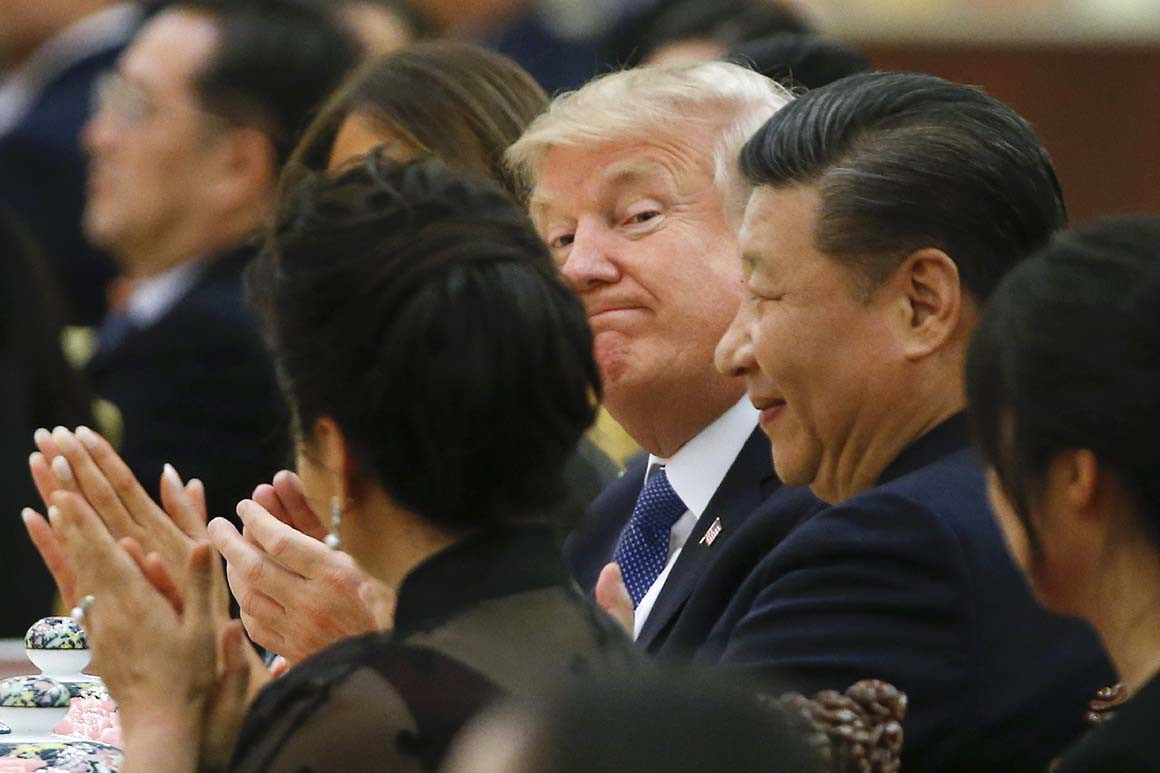 The new Xi plan was formulated at a time when world economists were forecasting a downturn in the Chinese economy all the while the CCP was touting its unending economic growth to its people and the world.  In spite of outside forecasts, the CCP and Xi aimed to double the Chinese GDP by 2020 with a 6.5 annual increase in their GDP!  (Remember that this is a closed, communist system that creates false narratives regarding their economic data so be careful when trying to understand their economic results which are primarily propaganda)  The very survival of the CCP and President Xi in China rests on their ability to hoodwink their citizens and keep a lid on any internal uprisings using the most brutal tactics deployed in the world today.  The failure of their economic plan is not an option and their personal survival depends on it.  President Xi was awarded a “lifetime” tenure as the Chinese President but you should focus on the world “lifetime”.  If he fails, he would most likely not survive and be replaced via assassination by the CCP leadership.  A person can fail but not the communist state.

For those pundits and talking heads that have read in a Chinese Fortune Cookie that the current stalemate is due to the ancient Chinese cultural norm that prohibits the “losing of face”, I say you are naïve and actually ignorant of current Chinese reality.  Failure is not an option for the Party or for Xi as they will cease to exist if they fail.  PERIOD.  You won’t find this in a fortune cookie!

Poor Performance vs US Trade War

The importance of the Chinese plan for 2016-2020 is key to understanding the seeming duplicity of the Chinese negotiators.  At one point, it appeared that a comprehensive agreement was imminent when suddenly the Chinese pulled out of the negotiations and tore up the agreed upon tenants.  This was countered by Trump doubling and tripling down on our tariffs against China.    At the center of this duplicity is the unprecedented decline of the Chinese economy and the failure of Xi and the CCP to deliver economic prosperity to their citizens.  The Chinese have repeatedly devalued their currency since the Trump tariffs were imposed in order to keep the cost of their exports to the US low but this is causing inflation and a lack of real growth at home.  According to Bloomberg; “Concerns over global growth slowdown and the persistence of U.S.-China trade war would continue to cloud the economic outlook. In the domestic market, whether the rebound in retail sales growth is sustainable is still uncertain.”  But, retail growth inside of China is difficult as the per capita income in China is 1/6th that of the US.  While all iPhones are made in China, the Chinese consumers cannot afford to buy them!  Inflation and rapid unemployment increases threaten the vary existence of the XI/CCP. 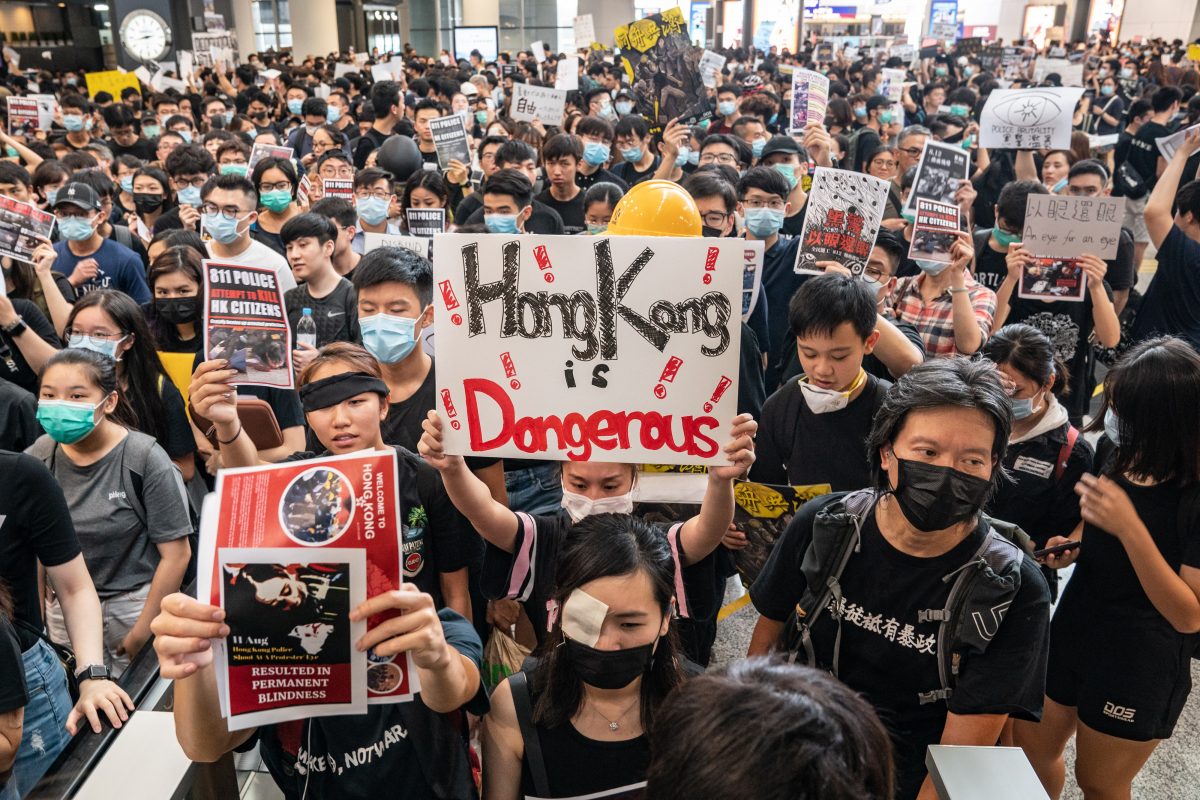 The 13 straight weeks of very large protest in Hong Kong have added a new threat element  to the CCP and Xi’s reign.  In China proper, their social enforcement army quickly strikes down any sign of protest before it can germinate.  Hong Kong was a part of the British empire until 1997 when it was transferred to China.  Today, it is officially known as a “Special Administrative Region of the People’s Republic of China”.  While a part of the British empire, Hong Kong became “Europeanized” and grew to become a major international financial and economic powerhouse.  The people of Hong Kong have more of a Western outlook than they do Chinese.  The recent uprisings over sovereignty has created a challenge for Xi and the CCP.  If China does not tamp down or quell the uprising, it could spread to the mainland of China.  If they react too harshly, they will certainly face a major international backlash especially from the US and Europe.  In addition to facing economic warfare from the US, they now face a political-social uprising from Hong Kong and their own citizens.  The latter is exacerbated by their high unemployment, not supposed to happen under a controlled communist regime, and their spiraling economic downturn spurred by the trade war.   This is not about saving face, it is about survival for Xi and the CCP!

Next Move for China?

Today, Xi has been very silent on the trade war with the US and has not been all that visible regarding the Hong Kong uprising.  The hardliners in the CCP have been out in front denouncing the US trade policies and the uprising in Hong Kong.  So, if we are to have a sane breakthrough in both of these conflicts, who will be the face of that resolution?  Is Xi the real or merely titular head of China today?  My personal opinion is that Xi and his leadership have been side-lined by the hard-liners.  The hard-liners will seek to quell the Hong Kong uprising using force if necessary.  They will also not agree to Trump’s demands for balanced trade without IP theft.  They are totally focused on their quest for world communist domination.  This is the same hubris that destroyed the Soviet Union!

Assuming I am right, then what we will witness in Hong Kong is a bloody resolution at best.  The CCP will have to use force to put down the uprising then sell it to their own people as a threat to their existence as a Chinese people.  The international community will stomp their feet and yell but in the end the US will stand alone against the Chinese aggression as Europe is too reliant on Chinese trade to protest too loudly.

The Trade War will go on and on until Trump is successful in reducing our trade deficit to zero and cut off IP technology transfers.  Trump will have successfully wounded the Chinese military/industrial complex and set their “Fifth Plenum” goals back years.  As I stated in “Trump China Tariff Policy-Win-Win for the US!”, (Short link: https://wp.me/pY51c-1i0), Trump will have met his goal in reducing the Chinese military threat by using economic warfare, not ground troops.  Hope I am right!